Unlike some of the famous ‘debt is dumb’ radio-talkshow personalities or best-selling authors of ‘do it like I did’ retirement planning books, Margaret and I are the last people who will preach to anyone about sound financial decision-making. Believe me, we’ve made a boatload of mistakes and ill-advised decisions over our years together. We did a few things right and benefited from a few twists of fortune, however, and ultimately managed to put ourselves in a position where we could seriously see a clear path to retirement. But, before I get to a discussion of the actual retirement decision, I need to set the stage….

Margaret and I were married in 1998—her second and my third try at everlasting love. It didn’t take us long to realize we’d hit the marriage lottery, but it took us longer to recover from the financial impact of divorce and (in my case) a cross-country move and mid-life career change. In 2001, after losing my job when a company I’d begun working for just a year earlier disbanded in bankruptcy, Margaret convinced me to go back to school to get my MBA, and I ended up going to work for a company one of my classmates worked for shortly after 9/11. It was a good opportunity, and I worked hard and rose quickly through the ranks.

About this same time, Margaret launched what would become a very successful home-based virtual assistant business, and armed with a good incomes and renewed self-confidence, we began to talk about where and how we might retire some day. Eventually we sat down over a map of the United States to decide where we could escape Chicago winters while still being able to easily travel to see our children and grandchildren. We quickly ruled out snow country, the hottest and driest areas of the Southwest, and hurricane prone areas such as the Gulf Coast. High tax states and high cost of living areas were eliminated next, as were areas with little recreation or entertainment options. Finally, we did an internet search for retirement communities, and because I’d had some wonderful experiences in Eastern Tennessee on business trips in years past, we ended up planning a vacation there in the Summer of 2002.

Right out of the box, Margaret was less than excited about the prospect of living in the South, and I had to make a couple of requests before our trip. First, I informed her that humming the banjo song from Deliverance wouldn’t be considered cute by the local populace. Second, I flat out warned her that jokes about NASCAR could get my butt beat up.

With that understanding, we set out for Nashville where we spent a couple of wonderful nights at The Opryland Hotel. One of those evenings was spent at the Grand Old Opry itself, and the woman who “hated country music” was so impressed, she spent a princely sum on CDs of it in the hotel gift shop the next day. We stopped at the Jack Daniel’s Distillery for a tour on the way to Chattanooga, after which good whisky was added to my shortlist of vices. Chattanooga was too hot (and perhaps too Southern?) for Margaret, and by the time we headed back up the state toward the Knoxville area, she was loosing enthusiasm for the state. Her patience really waned, however, when the MapQuest directions got us lost in an area of Loudon County that was pretty run down in those days. (The community has come a long way since then, to the point that it is now quite charming.)

“I want to go home. Now. I will never live here,” she informed me just before we made it to the entrance to Tellico Village. I pressed on…convinced that the pictures I’d seen of the lake, golf courses, and other facilities on the internet were real. Her body language and facial expression made it clear her mind was made up right up to the moment we crested a hill and saw a monument sign for the development surrounded by beautiful trees, plants, and flowers.

She relaxed a little.

A few minutes later, we exited a turn and were greeted with a view of Tellico Lake with beautiful lakefront homes dotting the shore and their owners’ boats moored in private docks.

She craned her neck for a better look.

We pulled into the parking lot for one of the three golf courses, and found a table on the veranda of the clubhouse and were sipping ice teas within minutes. The view was stunning, the weather was perfect, and we were surrounded by happy residents talking and laughing at neighboring tables.

She glanced at her watch.

“What time did you say the real estate office closes?” she asked.

Barely ten minutes had passed since her categorical dismissal of a possibility she would ever consider Tennessee home. We bought our first piece of property in the community three days later, and would eventually buy and sell a townhouse as well as we traded up to our current home.

Owning that property, and knowing that the decision of where to retire had been made, provided an incentive to step up our financial planning efforts. We hired a “guy,” as I like to call pretty much any expert on any subject, we maximized our 401K and IRA contributions, and we saved as much money as we could (considering the fact that we were now supporting two households…our Chicago-area home and the Tennessee property).

I’ll cover more financial and retirement planning subjects in future blogs, but the bottom line is, over the last few years, we began to feel comfortable with our ability to retire. Then, after getting Margaret through some serious medical scares, I was diagnosed with prostate cancer in 2015. I went through Brachytheraphy treatment (the surgical implantation of radioactive seeds) that year, and at this point it appears as though the cancer is in regression.

As if these first-hand challenges were not enough to get our attention and influence our priorities, both Margaret and I lost our mothers in this same period, and both of those poor dears suffered from conditions that could very possibly be gifted genetically. We began to have more serious conversations about our own end-of-life decisions, and how our attitudes about those subjects might affect the how and when of retirement.

Earlier this year, my oldest daughter and son-in-law announced a move (with two of our grandchildren in tow) from Los Angeles to Bend, Oregon, and we realized we would now need to visit three states at opposite ends of the country to see all of our family. And, if we were to have any amount of time with them at all, we would have to use all of my employer’s allowable vacation time just doing that. Never mind time at our Tennessee home or any other plans.

So really, we did not make a decision to retire so much as our life circumstances simply demanded that we take that step just to take care of what was most important to us: Quality time with the grandchildren before they are too old to appreciate it. Quality time with each other, while we are young and healthy enough to enjoy it. And, sufficient time to enjoy the fruits of our labor before age or health gets in the way.

As they say, time and love are two of the only things money can’t buy. I would have loved to continue working a while longer, but the income could never be suitable reimbursement for the opportunities that would have slipped away. I gave notice in March of this year, and we completed the transition to a new life in Tennessee in early June.

We don’t know that it will be the last move we’ll make, or the last time our life circumstances will dictate a change in plans, but we can certainly tell you that retirement here in Tellico Village is a wonderful. They say it’s “like day camp for adults…with alcohol!” We’ll keep an eye out on the future, but we certainly are not second guessing what has passed.  —Alan 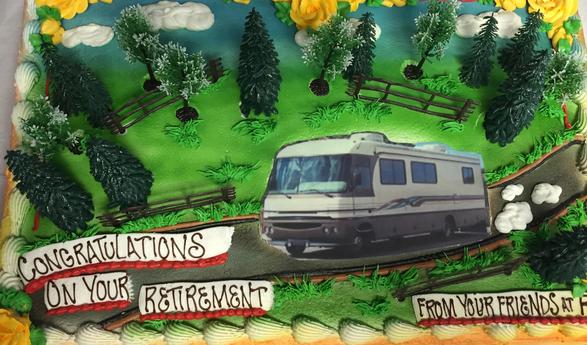