We’ve done a horrible job of keeping up with social media recently, mostly because I started writing a new, cozy mystery I’ve titled Thoroughly Dead in February. Now… eight months and 75,000 words later, the first draft is done and I have been able to step back and take a breather. While we may not have taken the time to communicate about it, however, we actually did quite a lot this year so it’s a good time to sort of bring everyone up to speed.

Our house is now on the market and we are pretty much prepared to begin our full-time RV life as soon as it sells. In the meantime, we completed a 5-month, 8,000-mile, 23-state loop of the country mid year to see friends and family. Whew! We’re tired just thinking about it!

In May, we were in Iowa for a month for the birth of our fifth grandson and time with two of our daughters and their families. This trip we discovered some absolute culinary gems in the Des Moines area and had a great time with the girls and our grandsons.

We were in Colorado in June to visit Margaret’s sister and brother-in-law and then spent a wonderful couple of weeks in the Black Hills area of South Dakota before jumping over to Detroit to watch our oldest granddaughter compete in  the National Volleyball Championships .

We returned to Tennessee briefly in July to deal with some issues with the house, and then we were back to Iowa to be the chase car for our youngest daughter and her husband’s week-long bike ride across the state for RABRAI.

August took us to Bend, OR to be with our oldest daughter and her family. We always love Oregon and we had a great time camping with our granddaughters and enjoying many of the area’s great restaurants, breweries, and distilleries.

In September we traveled south to see our daughter and her family in the San Gabriel Valley area of Los Angeles. In addition to having a couple of the best meals we’ve had in recent memory, we had an absolutely fantastic day at Disneyland with our oldest Grandson.

Late September was a great time to visit Sedona, Arizona and the Grand Canyon, and we did our fist “Pink Jeep” tours while we were there. It was a fantastic experience we hope to repeat in the future. On the way back to Tennessee, we held up in Memphis for several days just to avoid the remnants of Hurricane Gordon and ended up having a complete blast.

In early October we returned to the Hilton Head Island Motorcoach Resort in South Carolina for time with some family and friends. We absolutely love the Island and the people we’ve met there, and we just might consider owning an RV lot there someday.

Meanwhile, Back at the Ranch

We’re now back in Tennessee showing the property and enjoying all of our friends here in the village. We still love it here, but Fall is definitely in the air here in eastern Tennessee, and we’re itching to get the house sold and get ourselves to a warmer climate.

Hope to see y’all on the road! 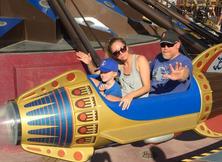 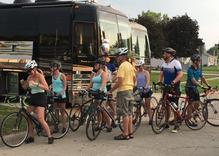 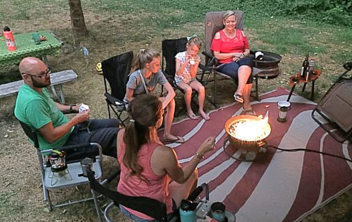 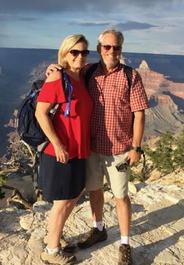