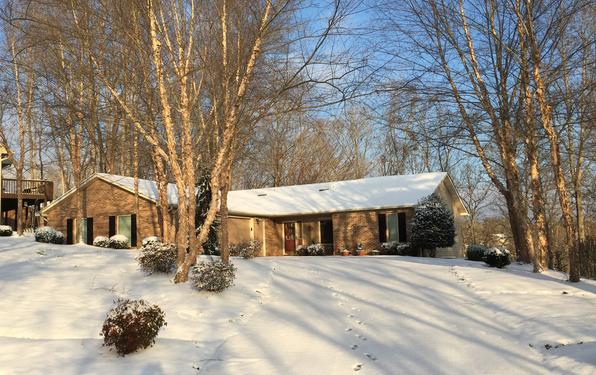 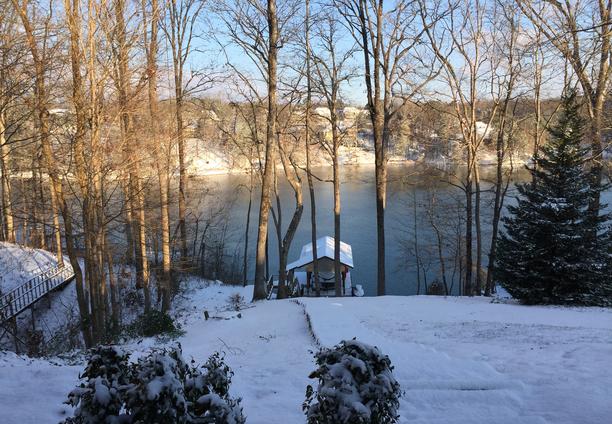 Does it Snow in Paradise?

We love eastern Tennessee, and we truly feel blessed to live in such a beautiful, friendly place. Other than the weather, however, we also loved living in Wheaton, IL. Life there wasn’t quite an “adult day care” environment like it is here in Tellico Village, but we had a comfortable, high-rise apartment at one end of the little downtown area dotted with restaurants, bars, shops, and entertainment options, and we had wonderful friends and family in the area who we really miss. If northern Illinois could boast of nine months of pleasant weather, we might never have moved.

Certainly, we knew this area of Tennessee has four seasons, however. We’d traveled here over the Christmas Holidays frequently over the years, and we’d experienced cold and inclement weather on numerous occasions. We had also traveled to Florida during the stifling heat and humidity of summer, and we’d decided that it would be much easier to escape Tennessee cold for a couple of months than it would be to escape Florida heat for four or five.

Now that we’re retired, however, we’ve realized that extreme weather plays an much larger role in our day-to-day lives than it did when we were working. Think about it…. When you’re working and commuting twelve hours a day for five days out of every week, bad weather isn’t really stopping you from doing anything. On the other hand, when you no longer work—particularly if you like to fill your days with outside activities such as golf, fishing, boating, and walking/hiking, for instance—weather extremes will absolutely cramp your style.

This can be translated as: “your butt is going to be planted in a Lazy Boy, and you’re not going to be happy about it.”

Before I go any further, however, I have to interject something about Lazy Boy chairs. Just a few years ago, a mention of a Lazy Boy would have elicited a not-at-all-positive response from me. A sarcastic smirk at a minimum. Sixty years of television sitcoms had reinforced an image of old, retired dudes in recliners that was anything but complimentary. Archie Bunker for one. Fred Sanford, for another. (If you’re too young to recognize these characters, I’m sorry. But take my word for it. You wouldn’t want to be either one of them.) But we live in a community with a lot of retired folks, now, and ergo at heck of a lot of recliners. A kind neighbor had even loaned us a recliner for Margaret to use while recovering from her hip replacement surgery. Even living with that chair for a month wasn’t enough to change my perception. It didn’t quite fit me, I guess. But we celebrated New Years Eve at that same neighbor’s house, and had an opportunity to spend the evening in a couple of their new Lazy Boy branded recliners. The “real deal,” this time. I guess the best way to convey just how impactful this experience was is to tell you we bought one the very next day.

I guess this experience confirms a couple of things, at least in my mind. First…I am indeed old, and a good recliner feels really nice. Second…every recliner is not a Lazy Boy recliner. Don’t judge me. If you’re not there yet, you will be some day. When the day comes, just remember I warned you. And I have no financial interest in the company, by the way.

So you’re tail end is planted in a Lazy Boy because the weather outside is dreadful. It might be too cold, as it was here in Tennessee a week ago, or it might be hotter than Hades in Arizona or a veritable sauna in South Florida, but whatever the weather is it is in no way compatible with the enjoyment of outdoor activities. Which brings me to the real point I want to make, which is: Give careful consideration to where you plan to retire, because your mental health is going to closely correlate with your ability to do things that engage and satisfy you.

As for our situation here in Tennessee, three or four days after it snowed, the temperature rose above freezing and all evidence melted away. A day or two after that we were driving the convertible with the top down. In the future, we may pile into the motorhome and head south at the first forecasts of snow, but for now we’ll take solace in the knowledge that we don’t have months of cold and snow ahead of us.

That knowledge makes the occasional snow day acceptable. Perhaps even entertaining, since it’s sort of nice to look out at a lake framed by a blanket of white, particularly when one is holding a steaming mug of coffee and secure in the knowledge that there’s no need to be anywhere or to accomplish anything.