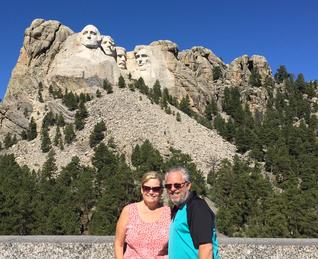 Mt. Rushmore and The Black Hills 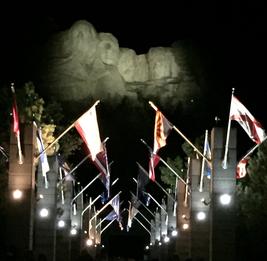 I’m sure everyone can agree there’s no need for one more “travelog” about this area…Mt. Rushmore in particular. If it’s not on your bucket list, it should be. It was on mine for about fifty years before I successfully gazed upon those four faces, and it’s a story worth telling, I think….

I was nine when I first stood at the Mt. Rushmore viewing area hoping to see what I’ve referred to much of my life as “the dead Presidents.” I’ve never meant any disrespect by that remark, by the way. I’m about as patriotic as an American can be, and I respect the traditions of the office in general, and the accomplishments of the four, great Americans immortalized on that mountainside specifically.

But I told you it would be another fifty years before I would check this world-renowned attraction off my personal bucket list, and that’s because, after a ten-day cross-country family odyssey with my parents, two sisters and a grandmother sandwiched into the family sedan, staying in every fleabag motel we could find, and never failing to frequent the greasy coffee shop in the parking lot, Mt. Rushmore was fogged in. I mean totally fogged in. Like we were staring at a fluffy down pillow.

We had arrived shortly after the visitor center opened, and by early afternoon had read every museum exhibit, hiked every trail, and fondled every useless souvenir imaginable. Finally, my father had to give us the bad news.

“We’re going to have to head out, kids,” he told us. “We need to be in Minnesota tomorrow night, and we’re not going to make it if we don’t get some miles in today.” He could see the disappointment in our faces. “We’ll try to come this way on our return trip.”

He knew we were anything but excited about visiting relatives, and his intentions were honorable, but we didn’t make it back to the Black Hills on that trip, and my parents would never see Mt. Rushmore.

With these memories foremost in my mind, Margaret and I aimed our RV toward the Black Hills last month. A little more than a day’s drive outside of Rapid City, SD, we received a phone call from my sister in Los Angeles. My mother (whom we had planned to see later on in our two-month, cross-country trip) had been admitted to the hospital and was in very grave condition. So, once again, I would not be seeing the monument. We turned the RV south and made a mad dash to Southern California.

Three days and thirteen-hundred miles later, we were at her bedside and were able to visit her numerous times over the next week. To everyone’s relief, her prognosis improved and they released her from the hospital. Meanwhile, we had plans made to take one of my daughters, her husband, our two oldest granddaughters camping over the long Labor Day weekend, so we shuffled our trip around and headed north to Bend, OR.

Finally, several weeks after we originally expected to be in South Dakota, we started back. This time, we made it to Casper, WY, less than a half day from Mt. Rushmore. The phone rang, and this time it was the call no one wants to receive. My mother had slipped away during the night. We agonized about what to do. Should we turn around once again, and head immediately back to LA? Should we leave the RV somewhere, and fly there?

In the end, I decided that we would continue on, and, after a 50-year delay, I would complete our family’s visit to Mt. Rushmore, and I would “show” it to my mom.

So, the next afternoon when Margaret and I stood in front of that iconic mountainside in awe of the accomplishments of the sculptures and the legacy of the great men they carved into the rock, the moment was even more emotional than it might have been otherwise. While, at any given moment, I would likely have a hard time remembering what I had for breakfast that same morning, I could remember the day at that observation point, with my parents, sisters, and grandmother, as if it were yesterday.

My mother loved Mt. Rushmore, and we bonded once again through tear-filled eyes as she looked down, and I looked up.  —Alan