Our Best Vacation Ever

“The best, ever” is about as hyperbolic as an accolade can get, yet I’m prepared to employ it when describing our stay at the Yosemite Lakes Thousand Trails campground this year.  The weather was almost perfect, vistas weren’t obscured by the smoke of wildfires, we scored a prime campsite under shade trees alongside the river, the fishing was excellent (we had six meals of fresh trout over the course of the seventeen days we were there), and the closest little town had a couple of good restaurants sporting even better bars.

All of these factors played into our experience, but we’ve enjoyed a similar level of benefits while camping before, so those alone are not enough to guarantee the top position in even my age-restricted memory. We stayed in a Thousand Trails campground located in a valley that has, for all practical purposes, absolutely no cell phone or data signal, and just to be certain we would feel we’d been stoned into the middle ages, the park’s paid WIFI was down and our particular campsite was surrounded by trees that blocked all satellite coverage. While the feelings of isolation these circumstances induced early on in our time there, they would—in the end—be the foundation of an epic experience.

First, we learned to accept the gurgle of the stream running along the back of our campsite as a soothing soundtrack for daily life with the added benefits that it provided an unparalleled tableau rendering television obsolete, a refreshing escape from the July heat, and an almost never-ending source of fresh Rainbow Trout. We broke out our inflatable kayak for the first time and less than half a mile downstream from our campsite we paddled through a virtually pristine section of the stream that could easily leave one feeling like they are channeling Lewis and Clark on their first exploration of the western half of the continent. Quiet: not a sound of another human being or offending technology. Idyllic: A family of deer sipping water from a pool at the edge of the bank. Life-affirming: Boysenberries growing along the shore; schools of fish swimming lazily under the boat.

We re-discovered some things that used to own the definition of the word “book” before their less elegant digital offsprings began to dominate the landscape. While somewhat primitive (given there appears to be no way to expand the type size to better suit our tired, old eyes, and the apparent lack of a word-lookup function or backlight for low light situations), we learned that the technology remains solid. Never once did we experience a software freeze or premature battery failure, and we found the “screen” technology to be vastly superior to more modern versions when attempting to read in bright sunlight. Plus, the campsite had a lending library where campers are encouraged to exchange books already read for others previously donated to the cause…something that’s never caught on with the iPads or Kindles. We enjoyed countless hours of engrossing stories over those seventeen days, and I find myself occasionally wishing we’ll find another destination so off the grid.

Finally, and perhaps the biggest contributor to making our Yosemite vacation experience the best ever is the two sets of neighbors who happened to occupy the campsite next to us over the course of our time there. The first was a father and son escaping to the mountains while Mom was away on a business trip. It was a joy watching dad’s patient tutoring of campfire building and cooking, and the boy’s demonstration that he had already surpassed his father in fishing prowess. He routinely out-fished us all and enthusiastically gobbled up the spoils of his conquests.

Then came a young family—a 12-year-old by and his parents—who, after a week of shared meals, drinks, experiences, stories, and deep, intellectual, conversation will forever have a place in our lives as true friends. I had the pleasure of teaching the young man to fish and ended up gifting him a rod and reel and some of the necessities of trout fishing to support the endeavor, and the experience of coaching him through the process of landing his first trout, followed by another, to feed his family that night was a cherished memory I will carry with me forever.

I’m sure our Yosemite vacation will be topped by some other destination or experience some day, but it won’t be easy. And, even when it is, I have no doubt it will remain on a very short list of episodes that ultimately make a life fulfilled. 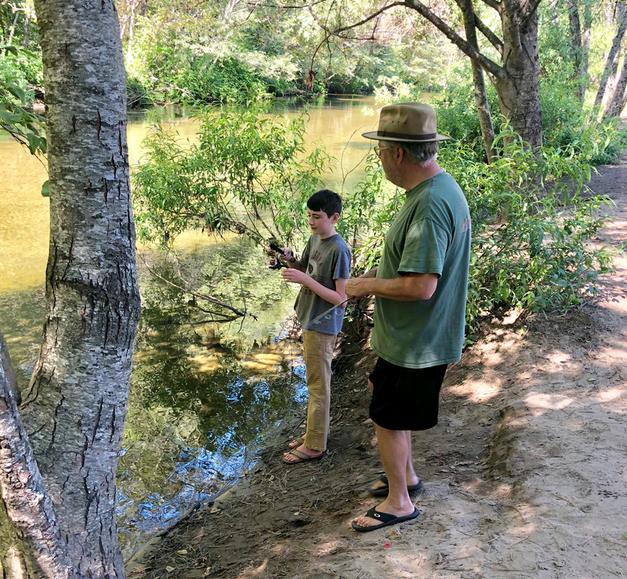