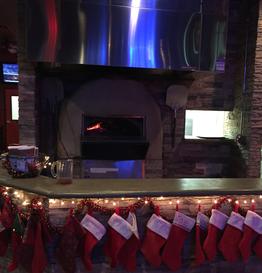 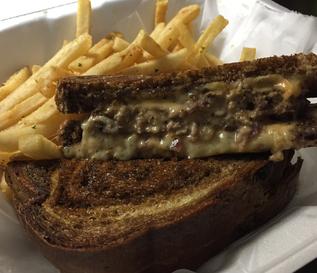 Not long ago, Margaret and I would have made the drive from Tennessee to Chicago in one long day. That was before my prostate cancer treatments and Margaret’s hip replacement made stops pretty much an hourly occurrence even when our dog, Lucy, would prefer to extend her nap a while longer. Now, we try to limit our daily drives to around four hours in the RV, and maybe a couple of hours longer when we’re in the car, which took us to Greenwood, Indiana a week before Christmas where we spent the night in one of the chain hotels that allows pets. We pulled into town after dark, and it was really cold out. Tempting to just order a deliver pizza, but Margaret had found the Main Street Grill on Trip Advisor, and it looked like it was worth the effort to pick up an order to eat in the room.

Restaurant reviews on the Trip Advisor aren’t always spot on. I’ve always suspected that the worst of the reviews are submitted by loyal fans of the nearest competitors while the best of them seem to have been written by a paid PR person. But, when a huge majority of a restaurant’s Trip Advisor’s reviews are glowing, it’s often a good sign. It was certainly the case with this little gem. Circumstances didn’t allow us to enjoy the restaurant environment, but immediately upon entering the doors, you’re confronted by a pizza prep station backed by a wood-fired oven that warmed up both the room and the spirits. Our order was being bagged as I approached the reception desk, and they had me out the door within moments of arrival.

Now I have to admit we were pretty hungry, and we darn near could have feasted on the containers the food was packaged in and been happy with that by the time I got the food back to the room. But honestly, our appetites haven't colored our reaction to our meals. Margaret’s Mixed Greens Chicken Salad was fresh and plentiful, and the dressing “was to die for.” The chicken was obviously grilled for her order, as it was juicy and tender.

My patty melt and fries were the real winner, in my humble opinion. First, the meat was Black Angus, and juicy and flavorful instead of being dry and tasteless like the offerings foisted upon the public by the big chains, and the onions still had some chew to them, suggesting they were grilled especially for my sandwich instead of en mass earlier in the evening. Second, either the thousand island dressing, or the burger itself, must have had some kind of special seasoning, because the sandwich had a nice kick to it. Finally, the sandwich was actually grilled on a flat top, giving the surface of the bread a nice caramelization. The sandwich was paired with an order of piping hot french fries that still had some crispiness to them despite steaming in a styrofoam container for the duration of the ride back to the hotel.

We wish we could have tried more, and we’ve put the Main Street Grill on our “must return” list. It was just one more example of why it makes sense to look beyond the same old chains for local and chef-owned eateries that take pride in their food and care about their customers.  —Alan