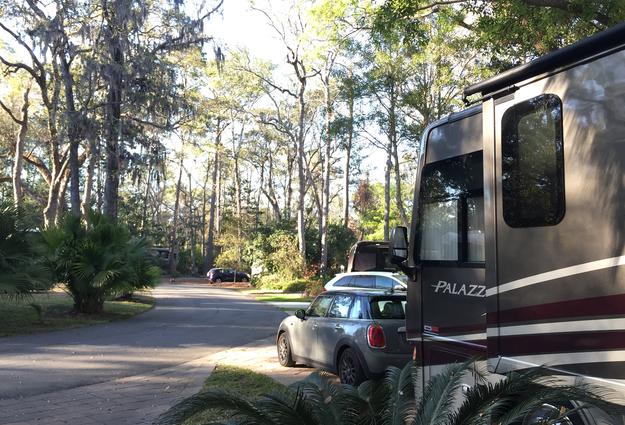 Before Margaret and I begin our dive into the world of “alternate lifestyles”, I think I need to define the term. Particularly since I lived in San Francisco for a number of years where I learned that some definitions of “alternate” might boggle other folks’ minds. I’m not judging…preferring to believe one of our inalienable rights is that of free expression and the ability to live one’s life without judgement. But the “alternate lifestyles” I’m going to talk about here is limited to the various ways an increasing number of Americans are choosing to put a roof over their heads, and how large that roof is.

In 1955, the year I (and a record number of my fellow baby boomers) was born, the average home in America was 1,170 square feet. Now—sixty-plus years later—the average is over 2,600 square feet, while average family sizes have shrunk from 3.5 to 2.5 in the same period. You might be asking yourself: “what the heck are we doing with all that extra space?,” and increasingly larger numbers of Americans are answering that question with: “we’re giving it up.” For some that resolution involves divesting oneself of all but the most essential possessions and squeezing into what has become known as a “tiny home,” some smaller than 300 square feet. But, for others, the solution might be a round, tent-like structure called a “yurt,” a park model trailer (small, semi-permanent structure similar in construction to the much-larger “double-wide” trailers usually associated with retirement communities like Sun City but with a maximum size of 400 square feet), or full time life in a 5th-wheel trailer or motorhome.

At the most basic level, the motivation for making this change is often a reduced cost of living. In December of 2016, the average selling price of a new home in the US was $384,000. Other than most luxurious of Class A motorhomes, none of the alternative housing options we’re talking about here cost anything close to that. A reasonably comfortable tiny home (if anything that size can truly be called “comfortable) can be built for less than $50,000, and a yurt could be as little as half that amount. Those cost do not include the cost of land with sewer, water and electricity connections, or a long-term lease in an RV park or other community where these structures are permitted.

Living (and traveling) full time in a motorhome, or pulling a large 5th-wheel trailer with a pickup truck large and powerful enough to handle its weight, is not necessarily less expensive than living in a “sticks and bricks” home, however. Depending on how far and frequently one wishes to travel in a given month, fuel costs alone can be as much as a mortgage on a small house, and while a monthly stay at a modestly-priced RV park can be as little as $400, a shorter stay in the nicest of the resorts can easily exceed $75 a night.

For those choosing the more mobile of the alternate living arrangements, however, it is often the freedom to wake up to a different view every day, and the ability to live virtually free of rent or mortgage payments, that motivate. RVers call this “boondocking,” and it amounts to exploiting opportunities to park overnight (albeit almost always without any hookups for sewer, water, and electricity) in places where no law or ordinance prevents it. Among the least attractive of the boondocking options are the parking lots of big-box retail stores and restaurant chains such as Walmart, Cabela’s, and Cracker Barrel, and at truck stops and rest stops in some states that allow the practice. (Don’t do this without checking with the store manager or confirming local ordinances allow it, however, or you may find yourself on the bright side of a police officer’s flashlight at some ungodly hour of the night.) While you might get a decent night’s sleep at the best of these locations, you can’t really “camp.” Extending slides, setting out lawn chairs and grills, or running generators are not allowed, and late-night lot cleaning and truck deliveries might interrupt your slumber.

The real boondocking prize, however, is temporary occupancy of a patch of land somewhere amongst the tens of millions of acres of public property managed by the Bureau of Land Management (BLM) concentrated largely in the western United States. Often there is absolutely no direct charge for parking on these public lands, although small fees (generally no more than a few dollars a day) are collected in developed areas, and established campground sites (sometimes with water and electricity) might be more like $10 a day. In almost all instances, stays in any given location are limited to 14 days out of every 28.

So, with the average mortgage payment in the US currently running around $1,060/month, and the average American family paying $175/month in property taxes (though this number varies dramatically from state-to-state), the cost of living in a “normal” home is around $1,235/month. Even factoring in the monthly payment on a modestly-expensive Class A motorhome (thinking of this option as representative of the high end of the RV and alternate lifestyle cost of living, it is certainly possible to spend less living in in an alternative manner, and quite a bit less if one is willing to settle for one of the lowest-cost options.

Housing costs are not the only savings to be had from simplifying one’s life, or “going tiny” as it might be translated on reality TV. Going from two cars to one, for instance, can save thousands of dollars every year. Smaller closets and dramatically reduced storage space make it difficult to accommodate the spoils of consumerism, so simplifiers generally find they spend many thousands of dollars less in clothing and personal possession expenditures every year than they did in a conventional lifestyle. Finally, there should be little need for home improvement expenditures, lawn-mowing equipment or landscape maintenance, multiple big-screen televisions, expensive kitchen appliances, or new furniture.

Some use the surplus cash these changes generate to work less, or to do more enjoyable work that is more satisfying or creative. Others concentrate more on the time with family, friends, and each other that refusing a yoke provides. It’s important to understand, though, that this doesn’t mean that adherents to the various flavors of these lifestyles live lives of reclusiveness and denial. On the contrary, many spend the money saved and freedom created on travel and experiences few of us can envision and even fewer can manage. Scour the internet and you’ll find countless examples of couples and individuals traveling the world and consuming its bounty.

So that brings me to our thoughts about downsizing our own life into a smaller (if not strictly “tiny”) home or full time travel in our RV. As I’ve admitted elsewhere on this blog site, we really love our life on the lake here in Tennessee, and it’s really hard—particularly given that there’s currently no pressing financial need—to want to take that step. On the other hand, we just spent the better part of a week at a RV resort on Hilton Head Island owned by individual property owners and home to hundreds of full-timers living in one of the most beautiful, year-round settings imaginable. As our stay progressed, we both came to the same conclusion: “We could live that way.”

Will we do it? I don’t know, but I’d say there’s a really good chance we’ll consider it seriously.
And it’s precisely the answer to that question that this blog should reveal over time.